We revealed her design in Boat International magazine in 2011, and now she becomes a reality. Maori Yacht has launched its first Maori 78, christened Blackmail.

Entirely customisable, she’s available with an enclosed cockpit and as an open version.

The Maori 78 becomes the new flagship series of the Italian yard. This 24m high-

tech luxury supertender (large enough to be a yacht in her own right) has naval architecture, exterior design and interior styling by Nauta Design.

Entirely customisable, she’s available with an enclosed cockpit and as an open version. The first hull’s owners have opted for the enclosed cockpit. And Blackmail also accommodates four guests in a midship full-beam master and a double cabin forward, plus a crew area with separate access.
Designed for high performance, Blackmail is powered by twin 1,800hp MAN engines coupled to Arneson surface propellers. She will make her official debut at the upcoming Monaco Yacht Show in September. 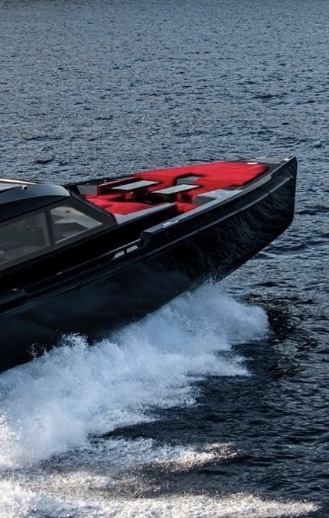 If you enjoyed reading this story, then we’d love it if you would share it!

If you seek a taste of the Maori experience, or simply wish to open a
conversation, leave us your details and we’ll be in touch with you shortly.

Maori Yacht is a continuous evolution that knows no bounds. Follow our pursuit by subscribing
to our newsletter where you will be informed about exciting milestones, upcoming
masterpieces and other news.

Close Menu
We use cookies on our website to give you the most relevant experience by remembering your preferences and repeat visits. By clicking “Accept All”, you consent to the use of ALL the cookies. However, you may visit "Cookie Settings" to provide a controlled consent.
Cookie SettingsAccept All
Manage consent

This website uses cookies to improve your experience while you navigate through the website. Out of these, the cookies that are categorized as necessary are stored on your browser as they are essential for the working of basic functionalities of the website. We also use third-party cookies that help us analyze and understand how you use this website. These cookies will be stored in your browser only with your consent. You also have the option to opt-out of these cookies. But opting out of some of these cookies may affect your browsing experience.
Necessary Always Enabled
Necessary cookies are absolutely essential for the website to function properly. These cookies ensure basic functionalities and security features of the website, anonymously.
Functional
Functional cookies help to perform certain functionalities like sharing the content of the website on social media platforms, collect feedbacks, and other third-party features.
Performance
Performance cookies are used to understand and analyze the key performance indexes of the website which helps in delivering a better user experience for the visitors.
Analytics
Analytical cookies are used to understand how visitors interact with the website. These cookies help provide information on metrics the number of visitors, bounce rate, traffic source, etc.
Advertisement
Advertisement cookies are used to provide visitors with relevant ads and marketing campaigns. These cookies track visitors across websites and collect information to provide customized ads.
Others
Other uncategorized cookies are those that are being analyzed and have not been classified into a category as yet.
SAVE & ACCEPT